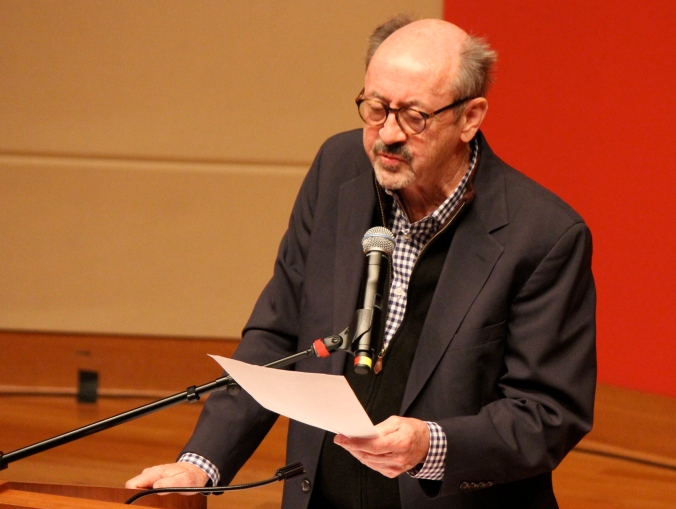 Poet Billy Collins looked at me, across the book signing table, and said, “How about: Go fuck yourself?” The former United States poet laureate stared through his round glasses, face stone serious expression. Quite literally, I was asking for it.

Humor is key to Collins’s work. However, he waited until his thirties before placing funny lines into his work, since he didn’t want to be considered a light verse poet. He knew at an early age that he wanted to be a poet, but thought that meant being serious, dark, all the time. “I knew two things about poetry,” he said. “One, it was very hard to understand, and two, poets were all miserable.”

Collins first read some fresh poems, straight off the printer, I assume, or the sheets would’ve been wrinkled. Two spoke about his cat, Audrey, who is so dark that she’s impossible to photograph. In one poem, Collins said the dark, furry mass walks toward him he sees two yellow circles, but only one circle when she walks away. “I never thought that would make it into a poem,” he commented.

He introduced another poem about a specific poet’s hardship—receiving advice. Although novel writers probably don’t face this problem, he said, every poet in the room would understand. “People who do this are always, always wrong,” he said, then read:

It all began fairly early in the day

at the coffee shop as it turned out

when the usual waitress said

after she had knocked a cup of coffee into my lap.

The poem describes other friends and acquaintances telling the speaker what to write about, including a fire drill, a dirigible, and a stranger’s completely tattooed face. It causes the speaker to wonder, “Why is everyone being so helpful?” The poem ends with a pair of ducks, and the female duck, in an Irish brogue, tells the speaker he will probably write a poem about this exchange.

Poet Billy Collins said reading aloud helps the poet catch syntactical issues that are hard to read. It’s not so much about gauging audience response.

He read a plethora of poems, including “To My Favorite 17-Year-Old High School Girl,” “A Dog on His Master,” “The Lanyard,” and “The Death of the Hat.” Collins pointed to these last two as poems that start out frivolous but become serious. This is how modern poets use humor, he said, as a strategy. If he had decided to draft an elegy for his mother and another for his father, it would’ve been too much. Poets need to start with small things let the poems flow into something larger.

“You can’t approach these things frontally—or, I think it’s dangerous,” he said. “You allow these emotional things to come into a poem that was otherwise unaware of them.”

When the reading ended, I waited, the last person in line, for him to sign my copy of Aimless Love. A Vonnegut Library volunteer handed out sticky notes and asked everyone to spell out what they’d like the poet to write in their books. I wrote:

I thought he’d transcribe it verbatim. Then I could say, Billy Collins wrote Something obscene in my book. He took as an open-ended instruction—a blank check, like I’d jotted [Something obscene]—and used the occasion to verbally abuse me. What an honor!

In the end, he jotted out some cartoon swears—exclamation points, furious squiggles—but not before suggesting, “How about: Dear James, Stop fucking following me?”

One thought on “Why Billy Collins told me to eff off”