Or, how my octogenarian grandfather taught me something thousands of tuition dollars didn’t 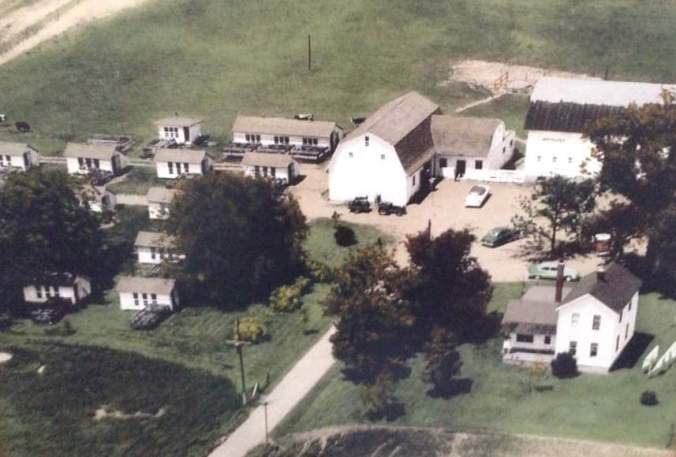 This aerial photo of the Figy Poultry Farm in Wauseon, Ohio, was taken in the early Sixties, I believe.

So I’ve been moping around, trying to write this and that, and complaining about having no time. I am a busy guy. Hand on the Bible. I’m working two jobs, planning a wedding, trying to be a good fiancé, sibling, friend, literary citizen, and cat-wrangler—and still make it to the gym during the week. Who has time to sit (all pensive and alone with a typewriter and the sunlight shining through the window to land on one’s angelic, writerly cheekbones) and write?

Last night, though, I read something that really gutted my excuses like a fillet knife. It wasn’t an advice book, one of those how-to guides from a bestselling author. Nor was it hate mail.

What I read was the in-progress autobiography of James N. Figy, my grandpa. It’s simple yet detailed. He remembers more about first grade than I do. He’s been working on it for a few years. Each page is handwritten and numbered. It starts in the beginning. What a novel idea. 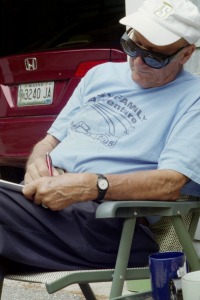 The writer on vacation in Maine. Whenever we’re together, I’m known as “the other Jim Figy.”

When he finishes a section, he sends it to a longtime friend in Michigan who types it. I’ve been trying to get my hands on a copy for months, promising him it would be easy for his friend to email the file. No luck. Then out of the blue, he sent me an email, saying he sent a copy. It arrived two days later in a manilla envelope, a sheaf of fifty-five legal pad pages. He assured me he has another copy somewhere.

My grandpa is not a writer. At least, that’s what he says. He’ll turn eighty-seven in July, and the wear of old age is starting to show. His eyesight has decreased dramatically. Standing up takes a little more effort than it used to, but who am I to judge? He’s worked his entire life, had hip replacements and other surgeries.

But he’s still full of life. He’s writing a book, for goodness’ sakes, although he’ll write off the whole project. Grandpa will say something like, “All I know is how to dress chickens…and not too much about that.” (What a boldface lie.)

In a way, he’s more of a writer than many people I know who went to college, received fancy degrees. Because he makes the effort.

At the end of the day, what separates the writers from the rest is not spelling (F. Scott Fitzgerald was a notably bad speller), not completely proper punctuation (see entry on: Cormac McCarthy), and not about getting it right the first time. The only true test is:

Did you put words, whether incredible or terrible, on the page today?

Being a writer isn’t always about inspiration. It’s about courage. Writing requires you to be brave enough to fail, to write crap and still keep going.

John Green, who’s not my literary hero or anything, described it as giving himself “permission to suck.” Green continues:

I delete about 90 percent of my first drafts . . . so it doesn’t really matter much if on a particular day I write beautiful and brilliant prose that will stick in the minds of my readers forever, because there’s a 90 percent chance I’m just gonna delete whatever I write anyway. I find this hugely liberating.

Not too recently, I wrote a blog about becoming a morning person, finding time to write in the wee hours of each day. Then I got busy, and tired, and started sleeping as long as possible before heading off to work.

Reading my grandpa’s autobiography last night really pushed me. Before I started, he told me in an email that it’s getting harder to see while writing, so he really needs to start cranking out the last portion. So what’s my excuse?

I’m pretty sure my grandpa has never read Kurt Vonnegut, who is my literary hero. My grandpa prescribes to straight-laced, salt-of-the-earth values, so Kurt’s rampant profanity and—dare I say it?—socialism would be a turnoff. However, he seems better at practicing one piece of Kurt’s advice. “To practice any art, no matter how well or badly, is a way to make your soul grow,” Kurt writes. “So do it.”

Here’s more on my grandparents, their work ethic, and marriage.

2 thoughts on “Shut up and write”