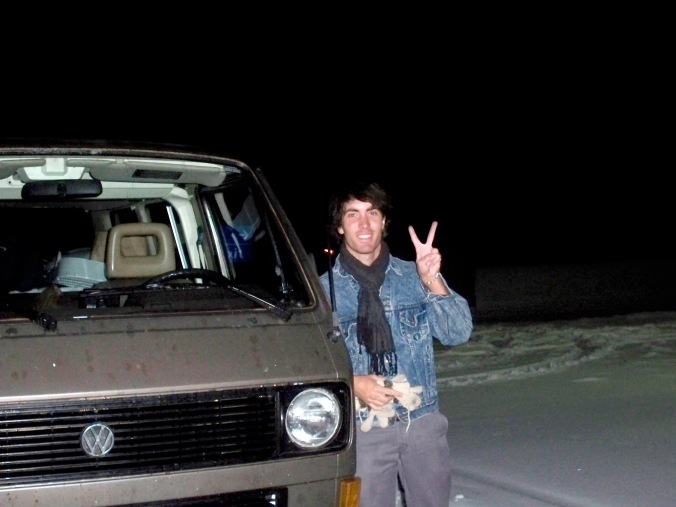 The snow, a tall patch, unplowed, stood straight ahead on the highway. No time to brake. Two hours east of Boise, it was too late, and I was too tired to think. I pushed in the clutch, held the wheel straight, let the van hit. It all started to spin, and soon van’s rear end was cruising in front of the driver’s seat.

Later, I’d wonder how the road could change from plowed to completely unplowed so quickly. Where had the plow trucks turned around and why not finish the job?

At the time, I wondered if the van would flip at one thirty a.m. in rural Idaho with no one around. I wondered if a semi was right behind me, about crush me and my van as we spun around in the snow like doing donuts in the church parking lot back home. But thousands of miles remained between me and Indianapolis. Being forced to idle, basically, through snowy mountain passes in eastern Oregon hadn’t speeded the journey at all. I’d planned to be in Utah that night. I’d been spinning my wheels, now spinning literally in my Volkswagen Vanagon.

The Vanagon is another fluke of the ‘80s—some square, in every sense of the word, offspring of free love, flower power Microbus hippy vans. It’s the kid in your class whose parents are way cooler, and he’s just all right by association. It features the aerodynamics of a cardboard box, and mine, being a flamboyant dull brown, shared the same hue. They’re unreliable, but this one had made it to and around the Pacific Northwest, so it should make it back to Indiana, I figured.

This clunky box continued to spin in the snow. Its headlights traced the last few degrees of a half circle, plus some. Once the inertia succumbed to friction and this spinning carnival ride from hell stopped, I just sat for a moment. No close trailing semi crushed me. No one honked or waved or stopped. No one else was even on the road.

Slowly, I put the van in gear, drove about a quarter mile to the first exit—one with no services. I parked on the exit ramp, then hopped out to inspect the van. Everything looked fine, no pieces dragging along the pavement. With no street lights and a pathetic flashlight, however, it was too dark to really tell.

It was cold, near zero degrees Fahrenheit, as I stood in the snow wearing highly impractical moccasin slippers. I just wanted to find somewhere populated to park and roll out my sleeping bag in the back of the van. Really, I just wanted to be home.

A few hours before the spinning van, I’d called my girlfriend at the time. She had flown back to Indiana weeks earlier and already reunited with her friends. I just wanted someone to understand where I was at, how the snow had slowed me and a line of cars to a creep through the mountains, how I was tired and stressed and lonely. Distracted, she mostly ignored me. She was driving around, getting into mischief with a friend, and uninterested in my situation. (I wonder why it didn’t last?) That phone call from a McDonald’s in Boise just intensified those feelings.

Standing on the exit ramp, the wind carried sad howls of coyotes. The haunting cries, though nowhere close, frightened me. They seemed to say, What the hell am I doing out here, alone?

This post is a part of Think Kit, a labor of love by SmallBox marketing that provides a blogging prompt once a month. This prompt was “Spin Your Tires.”

Share a tale from the road – a memorable childhood trip, the backpacking adventure that wasn’t quite a disaster, the honeymoon of your dreams, a forgotten itinerary, or something that happened on the way from Point A to Point B. Where the rubber meets the road, or the wings touch the sky (and anywhere in-between) – write your travel tale.

More stories about my old van to come.