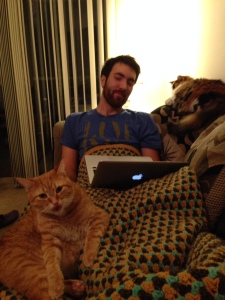 “The cat is the best anarchist.”
-Ernest Hemingway

My alarm clock is useless. At least, the electronic one I have to plug in and reset if the power goes out. But now, I don’t even need my phone alarm. I became a morning person.

Granted, it helps that my cats want their breakfast earlier and earlier. Herman—the orange devil, as his friends call him—has started waking me up around five thirty a.m. Sometimes later. Sometimes earlier. I get out of bed, and Pumpkin starts screaming, saying either GOOD MORNING! or HURRY UP, I’M HUNGRY! After that wake up call, I’d have to fight to fall back to sleep, so it’s less work just to stay up.

(Why not lock the cats out of my bedroom? Think long and hard about what you’re suggesting, you heartless monster.)

What I like about morning is the quiet—once Pumpkin stops yelling, of course. It’s calm, and I can be productive. But first, waiting for the coffee magic to take effect, I scroll through the wasteland that is Facebook at six a.m. The only active users are local news stations posting car accident reports.

The main reason I get up in the morning is to write. If I stop spinning my tires, gain traction, my writing really takes off. I accomplish my freest, freshest writing in the morning, quite frequently. My internal editor hasn’t yet clocked in, so I don’t feel like someone’s peeking over my shoulder, a luxury I don’t have at work.

By the end of the workday, after eight hours at a desk, after an hour at the gym (well, sometimes) and fixing dinner, I feel slightly overcooked. For a time, I used to relish the night. Now I languish. But I wasn’t always a night owl, probably not until junior high.

When I was about seven, I got into the habit of waking up around six a.m. just to curl up on a living room chair with a thick afghan blanket and read. It wasn’t a formative experience or anything, and my memories are far from cinematic. But I remember one scene: One morning, I glanced from Winnie the Pooh to the coming sunrise, as the sky changed from black to blue. There was one specific hue, a shade of periwinkle, that whenever I see it still reminds me of Winnie the Pooh.

My dad was always awake then, working on remodel quotes, reading a devotional book. But I feel like we had an understanding. We didn’t really talk in the morning, because we both wanted that little smidgen of peace before the day dropped on our heads.

It’s strange to think that becoming a morning person means becoming more like my dad, but it runs in the family, I guess. I hear my grandpa got up before five every morning to work on the farm. (I think he sleeps in a little since retiring.) My dad tells me grandpa didn’t have an alarm clock back then. But I wonder if he had a cat?

One thought on “How I became a morning person”