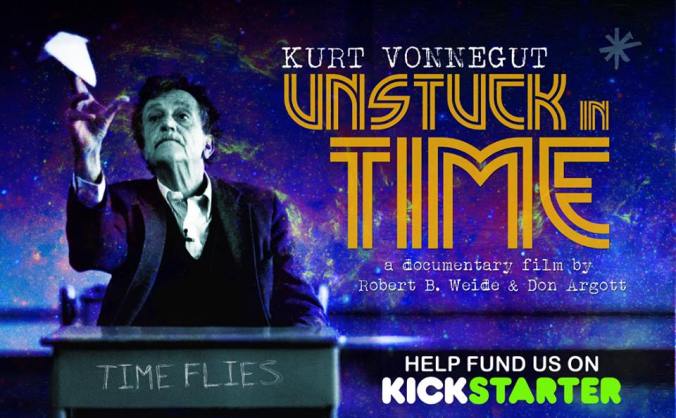 The authorized biography of Kurt Vonnegut Jr. needs your help. The film, which has been thirty-some years in the making, launched a KickStarter campaign Tuesday to crowd-fund $250,000 to finish Kurt Vonnegut: Unstuck in Time.

Filmmaker extraordinaire Robert Weide was only twenty-two when he met Kurt, then sixty, in 1982. Yet the two struck up a friendship that lasted until Vonnegut’s death. (Kurt’s up in Heaven now.)

The multiple Emmy award winning director and executive producer of Curb Your Enthusiasm, How to Lose Friends and Alienate People, and most recently The Giver, Mr. Weide said in a release on Tuesday:

Maybe, when the film is finally finished, it confirms that this incredible adventure—becoming very close friends with someone I admired so much—has finally come to an end.

I talked to Bob (as Mr. Weide introduced himself over the phone) for an article I wrote about Vonnegut’s boyhood home in Indianapolis. He visited the home with Kurt in 1994. The house on the corner of 44th St. and N. Illinois is up for sale, but back then, the former owners gave Kurt and Bob carte blanche to film, for Kurt to amble around remembering his young life.

“Kurt was reminiscing about different neighbors,” Bob said about that day. “He talked about one old man who lived in the neighborhood who had two very mean dogs, called Boots and Beans, and they used to terrorize the neighborhood.”

Apparently, after Boots and Beans killed a Vonnegut cat, Kurt’s father, Kurt Sr., told the old man he’d shoot the dogs if the old man didn’t restrain them. The old man replied that he’d shoot Mr. Vonnegut if he did any such thing, so the dogs lived happy, unfettered lives.

“He was full of those kinds of anecdotes,” Bob said.

It’s time to see, to hear Kurt tell these anecdotes on screen. If you live in Indianapolis, it’s a matter of cultural pride—and repaying our debt to the author. After all, we weren’t always as nice and proud of Vonnegut. We weren’t always home of the Kurt Vonnegut Memorial Library on Senate Avenue.

I went to Indianapolis last week, appeared on a TV show and a radio show, then signed books in the [L.S. Ayres] bookstore. I sold thirteen books in two hours, every one of them to a relative. Word of honor.

Vonnegut had a love-hate relationship with Indianapolis. I think he hated to love it, since it was all of his jokes and what people liked about him (his words, not mine). Indianapolis permeated his writing, down to the voice. “I myself grew up in Indianapolis, Indiana,” he once wrote, “where common speech sounds like a band saw cutting galvanized tin, and employs a vocabulary as ornamental as a monkey wrench.”

Still, the author said at a 1996 Butler University commencement that if he had a chance to do it all over, he’d still choose to grow up in Indianapolis, in the home on Forty-fourth Street and North Illinois.

Be one of the nice ones. Please check out the KickStarter page for Kurt Vonnegut: Unstuck in Time.